by NewsRoom
in Κοινωνία
0 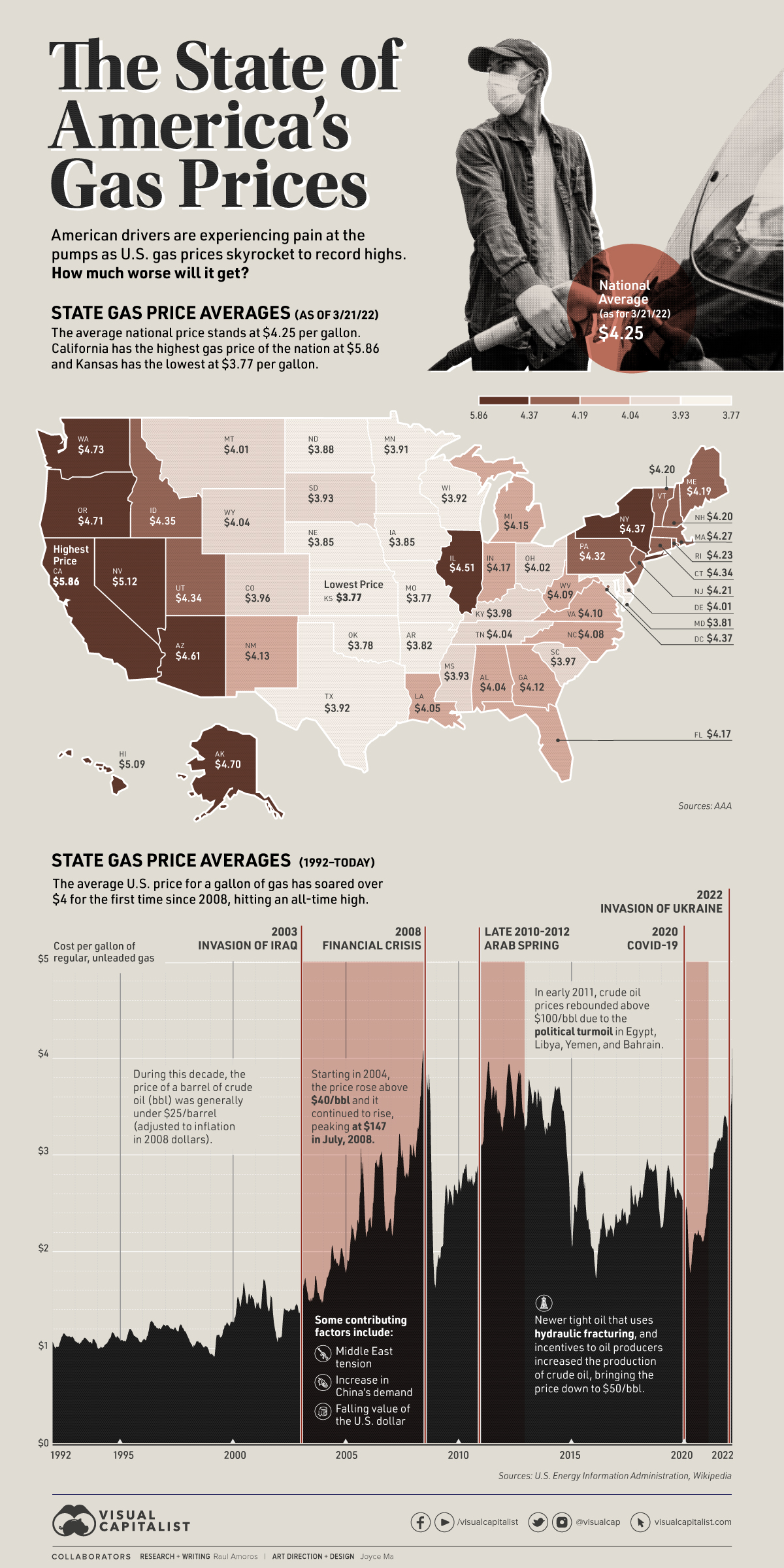 In recent days, gas prices have skyrocketed to all-time highs.

According to the American Automobile Association (AAA), the national average price of regular unleaded gas has reached $4.25 per gallon as of March 21st, 2022. This is the first time since 2008 that gas prices had exceeded the $4 per gallon mark.

The price of gas was already rising two weeks before the Russian invasion of Ukraine, owing to the increased demand due to the lifting of COVID restrictions. But when the war broke out, the price of regular gas jumped 41¢ during the first week. This surge in prices could add up to $2,000 in annual cost to the average American household.

While the price at the pump sits at $4.25 per gallon on average, it’s worth mentioning that prices range quite substantially depending on the state. California has the highest average price at $5.86 per gallon. On the other extreme, Kansas has an average price of $3.77 per gallon.

Where is Gas the Most Expensive in America?

There are eight states where gas prices are above $4.50 per gallon, and three states where the price is above $5: California, Hawaii, and Nevada.

Here are the 10 states or districts with the highest gas prices:

Where is Gas the Least Expensive in America?

There are 16 states where gas prices are under $4 per gallon. Here are the 10 states with the lowest gas prices:

There are a few reasons why gas prices can vary from state to state. State taxes play a big role in the final price at the pump, and they can range from 57.6¢ per gallon in Pennsylvania to 8¢ per gallon in Alaska.

Proximity to refineries is another contributing factor for cheaper gas. States like Texas, Louisiana, Mississippi, and Alabama often have lower prices than other regions.

When Will Gas Prices Go Down?

Gas prices were on the rise due to an oil supply shortage. When war broke out, there was an additional price surge due to sanctions or bans on Russian oil exports by the West.

It’s also worth noting that even as the price of oil begins to fall once again, there is typically a lag before prices at the pump begin to ease for consumers.

The Energy Information Administration projects that average spot price of Brent crude oil will be $105.22 per barrel this year, a $22 difference compared to its original February forecast. As a result, many experts are expecting that gas prices could stay near or above $4 per gallon for the rest of the year.